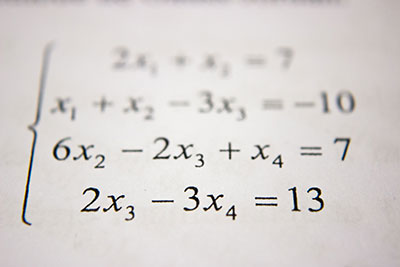 When she was a kid, Katie Lee used to watch Numbers, a series about a detective who solved mysteries with math—and she knew that she had found her calling. Every equation is a puzzle to solve, and she loves that rewarding feeling of deducing the answer.

Thanks to Whittier, Katie found challenging mysteries that her classwork had prepared her to figure out. As only a sophomore, her math professors Fred Park and Mark Kozek guided her to her first summer internship, at Michigan State University. In small groups, she and fellow students researched reverse polynomials—and she constructed an equation to determine the value of a polynomial to the 100th power, without first calculating the first 99 values.

In the summer between her junior and senior years, Katie took a big step to graduate-level research at Texas A&M University. Category theory isn't a subject typical of undergraduate research, but she was up for the challenge. Her Whittier classes had prepared her by allowing her to figure out problems on her own and to think creatively about new ways to approach equations. That preparation allowed her to excel at the category theory research—so much so that she may soon find her name published in a paper alongside one of the Texas professors.

The graduate-level work also prepared Katie for her aspirations of eventually earning her Ph.D.